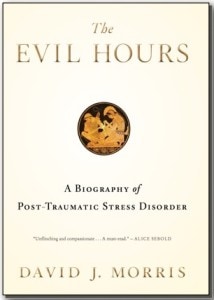 A biography of Post-Traumatic Stress Disorder

One of the best books I’ve ever read about trauma and PTSD just came out in 2015, “The Evil Hours: A Biography of Post-Traumatic Stress Disorder” by David J. Morris. It’s not written by a clinician or researcher, but by a professional writer, former Marine officer, and Iraq war correspondent, who himself has PTSD. It is extraordinarily well-written and well-researched; he has educated himself in the history, theories, and most up-to-date research studies, reporting on them in a very accessible yet detailed and scientifically astute manner (The endnotes are extensive and worthy of an academic textbook). But what makes the book especially compelling reading is his way of interweaving the science with personal accounts of his own experience and that of others he’s interviewed. This provides a moving human context to the history and science. In part, the book is a record of his attempts to heal his own PTSD, and we hear a detailed journey of his odyssey through the VA treatment system. The first-hand descriptions of his own PTSD are amazingly vivid and give one a sense of the subjective experience of PTSD unique in such a work.

The first half of the book consists of chapters on the history of the diagnosis, emphasizing its origins in war experiences, culminating in the first appearance of the PTSD diagnosis in the 1980 edition of the DSM-III, the diagnostic “bible” of the mental health professions. There is a fascinating account of how a group of Vietnam veterans and two psychiatrists, including Robert Jay Lifton, pushed the APA to recognize what they initially called Post-Vietnam Syndrome and include it in the upcoming revision of the DSM. In a central chapter, “the Haunted Mind,” Morris discusses and describes the subjective experience of PTSD , emphasizing the altered states of consciousness and the distorted sense of time characteristic of PTSD, in which past, present, and future become mixed together, disorienting the survivor in a liminal realm that separates him/her from normal everyday experience of “the normal.” As a therapist , I found this section to be especially helpful in understanding my patients’ experiences.

The second half of the book is a review and discussion of the state of the art in treatment for PTSD. He emphasizes that this is based on his own experience in searching for treatment for his own PTSD, and his “research into the science and philosophy that inform them.” In the chapter titled “Therapy,”he goes into an extended discussion of “Prolonged Exposure Therapy” (PE), which the VA recommended he try, and he found it made him progressively worse as the behaviorally oriented treatment progressed. PE essentially requires the patient to repeatedly re-experience the trauma in their imagination, thus re-living the fear, anxiety and terror enough times that the mind stops reacting to it as if it were still happening. Based on conditioning theory, it posits that a fear reaction can be extinguished if it is repeated enough times without the feared outcome occurring. Touted by the VA as a very effective treatment, Morris was put off, to say the least, by what he describes as a mechanical procedure, delivered in a rote manner, by a therapist whose deliberate detachment and emotional distance caused him to conclude that it was like nothing he would consider therapy: “And I began to wonder, what is it about post-traumatic stress that makes such sadistic methods seem reasonable? What is it about PTSD that so confounds the clinical mind that it resorts to methods that are virtually indistinguishable from torture?” He describes being increasingly full of anger and fear as the therapy progressed; he says “I began to feel better almost immediately after quitting PE therapy…After two weeks without PE therapy, I began to feel almost normal again.” He asked the VA what his options were, and he was offered the other “evidence supported” therapy for PTSD, Cognitive Processing Therapy,” CPT, group therapy based on cognitive-behavioral principles. Morris did feel helped by CPT, and at the very least found it much less unpleasant than PE. Evidently disillusioned by what he had experienced thus far at the VA, he looked into other types of therapy, and talked with some psychodynamically oriented therapists: Russel Carr, a Navy psychiatrist who has developed a promising short-term PTSD treatment based on psychoanalyst Robert Stolorow’s “intersubjective systems theory,” and Ghislaine Boulanger, a psychologist/psychoanalyst who writes about a psychodynamic understanding of PTSD. He had extended conversations with these clinicians, and while he wasn’t in formal treatment with them, “Still, talking for a few hours to practitioners like Carr, Stolorow, and Boulanger while researching this book helped me about as much as twelve weeks of CBT.”

A short chapter titled “Drugs” discusses the few drugs found helpful in treating PTSD symptoms. He mentions the SSRI’s, especially Zoloft and Paxil , as having shown some effectiveness, and these have been approved by the FDA for PTSD treatment; they seemed to address some of the major symptoms associated with PTSD, depression and anxiety. But he notes that there is no evidence supporting the effectiveness of SSRI’s for single-incident traumas such as car crashes and rapes. Additionally, SSRI’s don’t seem to help much with long-term PTSD sufferers either: he points out that “…none of the clinical trials on long-term chronic Vietnam veteran PTSD sufferers, a group that had long served as the nucleus for PTSD studies, had shown an improvement in symptoms” on SSRI’s. An Institute of Medicine review found that there “was no evidence that any drug actually treated PTSD across the board, SSRI’s included.” Certainly this may well be due to the fact that PTSD is a multi-symptomatic and complex disorder, that has effects at all levels of the person- biological, psychological, interpersonal, spiritual, philosophical, and moral. There are however two drugs Morris discusses, both mainly used to treat high blood pressure, which directly address the stress-response system implicated in PTSD, which have shown promise. The first of these is propranolol, a beta-blocker which blocks the action of adrenaline, has been found to prevent the development of PTSD if administered within a few hours of a trauma; it works by reducing the nervous system arousal attendant upon a trauma, thus preventing it from becoming “imprinted “ as a traumatic memory. There has also been some recent research not mentioned by Morris which has shown promise in treating PTSD long established; it based on new memory studies showing that memory, rather than being fixed, is subject to reorganization and “reconsolidation” each time it is recalled. If the memory is activated while propranolol is damping down the adrenaline stress response, it is reconsolidated as a normal, non-traumatic memory which no longer has the power to cause symptoms of anxiety and terror. This use of propanalol is unique in that it is not effective alone as biological treatment, but is used as a part of a psychological therapy, in a trauma-processing protocol. Another blood pressure drug, Prazosin, shows promise in research in reducing PTSD nightmares, an otherwise neglected area in PTSD research, but a major clinical problem contributing to the often severe insomnia/sleep disturbance of many PTSD sufferers.

In the chapter on “Alternatives”, Morris tells the story of a woman who developed PTSD after a rape at age 19, and struggled with it for years until she found relief by practicing yoga. Surprisingly, Morris himself was able to get past the “woo-woo” aura surrounding yoga and found it quite helpful—“In the Marine Corps we had a saying: ‘If it’s stupid but it works, then it isn’t stupid.’ Personally, I plan on doing stupid, functional things like yoga for the rest of my life.” Morris cites the research recently published by psychiatrist and trauma specialist Bessel van der Kolk and yoga teacher David Emerson, which found that yoga is very effective at reducing the hypervigilance and hyperarousal associated with PTSD. (Emerson has also written two how-to books on “Trauma-Sensitive Yoga,” and van der Kolk has been quoted as saying that he now insists that his trauma patients be taking yoga classes while in treatment with him.) It seems that yoga does at least three things which PTSD patients need help with: it helps survivors get re-connected to their bodies, through the posture practices; it reduces the nervous system hyperarousal, mainly through the yogic breathing practices, and it helps survivors to get grounded in the present moment rather than stuck in the past, through the meditative aspects of yoga practice. It has the additional advantage of bypassing language, since trauma is encoded more in the body than in words. (Elsewhere, van der Kolk has said, “trauma is not the story of something that happened, but the residue of it in the body.”) The other evidence-supported treatment method he discusses in this chapter is EMDR, Eye Movement Desensitization and Reprocessing. Morris didn’t report experiencing EMDR himself, and he notes that while the VA has designated EMDR as an evidence-supported treatment, he found that EMDR was not available in any of the VA facilities he contacted in Southern California where he lives. He said that “There remains a detectable skepticism toward EMDR within the VA system and the research it sponsors.” This may simply be due more to a factor Morris mentioned earlier, the VA’s emphasis on treatments that are “scalable” and deliverable in group formats, rather than PTSD therapies that require individual therapy such as EMDR. The wide acceptance that EMDR has found among even many psychodynamically oriented therapists, and the large research literature supporting it would be consistent with this explanation.

An especially interesting aspect of the book is the author’s emphasis on the cultural and philosophical implications of PTSD; throughout the book’s examples he illustrates how trauma is often transformative of the person’s way of being in the world, and that PTSD is, beyond the individual’s injury, also a form of “witnessing” and testimony that is a positive contribution to society, by calling attention to the traumatogenic experiences (war, rape, violence, abuse) which a culture cannot afford to treat with neglect, denial, or blindness. He emphasizes a view of PTSD as “moral injury,” which is not readily therapized away. Indeed, many trauma survivors describe their loss of a sense of basic safety in the world, and loss of a belief in a basic goodness in people. His treatment of trauma makes it clear that it is a problem with effects at multiple levels of the human experience, and that ultimately it is an injury to the human spirit. He concludes the book with a discussion of a controversial subject, Post-Traumatic Growth. Initially he was skeptical that positive personal growth could result from trauma, and feared that such a concept could seem trivializing of tragedy. He seems to leave this as an open question, but acknowledges that perhaps something positive had come as a result of his experiences: “War has made me as I am. And there’s a kind of beauty in that, or at least a kind of order, something that helps me make sense of the world.”

Go to Upcoming Events for information about an upcoming seminar on “Understanding PTSD: A Seminar for Spouses, Families and Trauma Survivors”

Our logo is derived from the 12th c. labyrinth at Chartres Cathedral and represents the journey of recovery and transformation.